How to Be a Beat Saber Pro 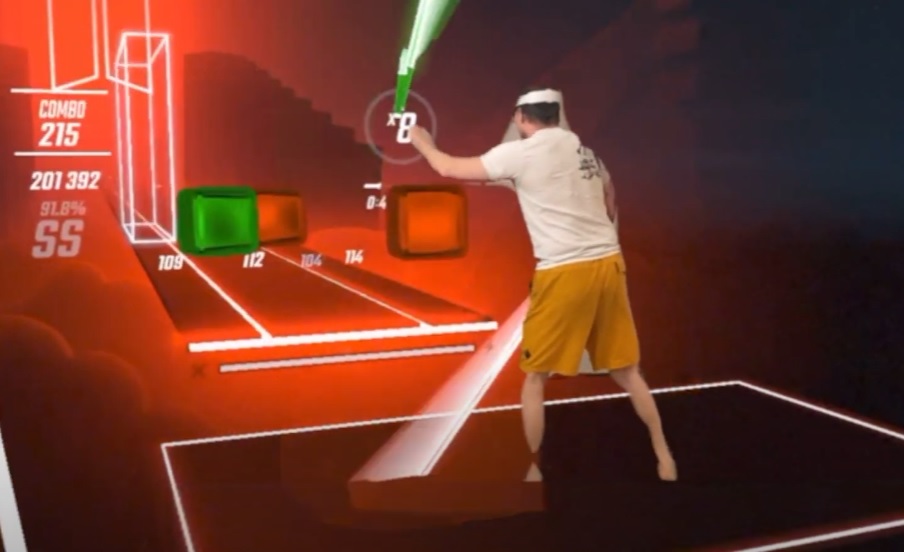 Beat Saber is an endurance/strength game. You’re going to be moving your arms around very fast in front of you for a long time.

It’s a competitive game. You’ll be fighting for high scores against some athletic people from all around the world.

It’s the kind of game you’ll keep coming back to, with many more hours than any other VR title.

It looks like this after you’ve been playing for a year: https://www.youtube.com/watch?v=Mku9xegGVUM

I’d recommend playing on the Oculus Quest 2. It’s easy to get in and out, has better pixels per degree than all the other headsets so you can see the notes more clearly.

It cannot be overstated how important it is to be able to jump in and out of this game. It’s a really intense physical game, and you’ll want to take a rest, take the headset off, and then quickly get back in again later after you cool down.

Upgrades: The Quest 2 Elite Strap helps a lot when things get intense. The default face plate it fine and can be washed with non-scented laundry detergent, if you decide to push yourself hard to get a high score. I used to appreciate earbuds on the Quest 1 for better audio cues, but haven’t tried any earbud upgrades for the Quest 2 yet.

Oculus provides a built-in screen recording feature. You can plug your headset into your PC (and awkwardly hit “allow” in VR lol) to get access to the videos. I’ve been using Adobe Premiere to fix up the videos off the headset since the audio/video aren’t in sync from the recording. You can Unlink the audio/video tracks and shift them into place.

The easiest way to record in green screen mode is with an iPhone 11+ and this tool: https://github.com/fabio914/OculusQuestMixedRealityForiOS

You’ll need a phone holder tripod to use it, where the phone can be put in landscape (horizontal) orientation. To record videos, you’ll use the built-in iPhone screen video recorder. It’s a bit tricky to set up but it works most of the time. If you put the headset down for a while it might hang so make sure to check the phone before starting again.

Start slow, enjoy the music. Try to be a completionist rather than a perfectionist.

Buy the extra tracks and find music you enjoy listening to. The basic tracks are mostly boring. I put recommendations at the end so you can save some $$.

At this point you’ll be able to get scores in the top 100 on most of the albums.

How to get Rank SS⌗

It’s not about swinging your arms, it’s about rotating your wrists. It saves a ton of energy can you can go longer. You want to maximize the speed of the blade, since you get higher scores for being more “on target” swinging through the middle of the block in the exact right angle, and for swinging faster through the block. Being on target is usually obvious, but getting very high speed is impossible without swishing your wrists not just your arms.

How to do rapid sequences⌗

Rapid drumming seems impossible at first but becomes easier with lots of practice. The two main tricks are to:

How to get Faster score bonus⌗

Start by playing the song on Expert without the Faster upgrade. Once you get SS/MaxCombo excellent scores on it, flip on Fast mode.

Fast mode is fantastic because the songs are shorter so you can get in more reps faster, and the speed makes you learn automatic reflexes rather than thinking as much about the notes.

Get a good amount of sleep, because Faster and Expert+ require you to train. In your sleep your brain is playing through the games in a loop training yourself to get better. So get 8+ hours of sleep each night after playing for 30 minutes or more. Sleep also helps with Disappearing Arrows.

How to get Disappearing Arrows score bonus⌗

I’d recommend picking a song initially where the blocks appear fairly close to you and the BPM is higher. For these types of songs you will have automatic reflexes for the most part. Also pick songs where there is a lot of repetition in the pattern and it mostly goes up then down and repeats, so there are fewer surprises.

I usually play on Faster without Disappearing Arrows to prime my reflexes, and then play the song again immediately without the arrows to check my recall. By alternating like this 4+ times in a set, you’ll learn the song faster and start to feel your arms swinging without really looking at the notes.

How to get to Expert+⌗

Some Expert+ songs are harder than others, but they’re all pretty fast. I’d recommend starting with Expert mode with Faster enabled. Once you’ve completed most of the songs this way, Expert+ should be within reach.

Downvote: Camellia can go to hell. Seriously fuck that album’s sandbagging nonsense. I’d recommend skipping it unless you want to be good at the multiplayer games where asshats keep picking songs from this album and robot away by themselves for 5 minutes after everyone else has left.