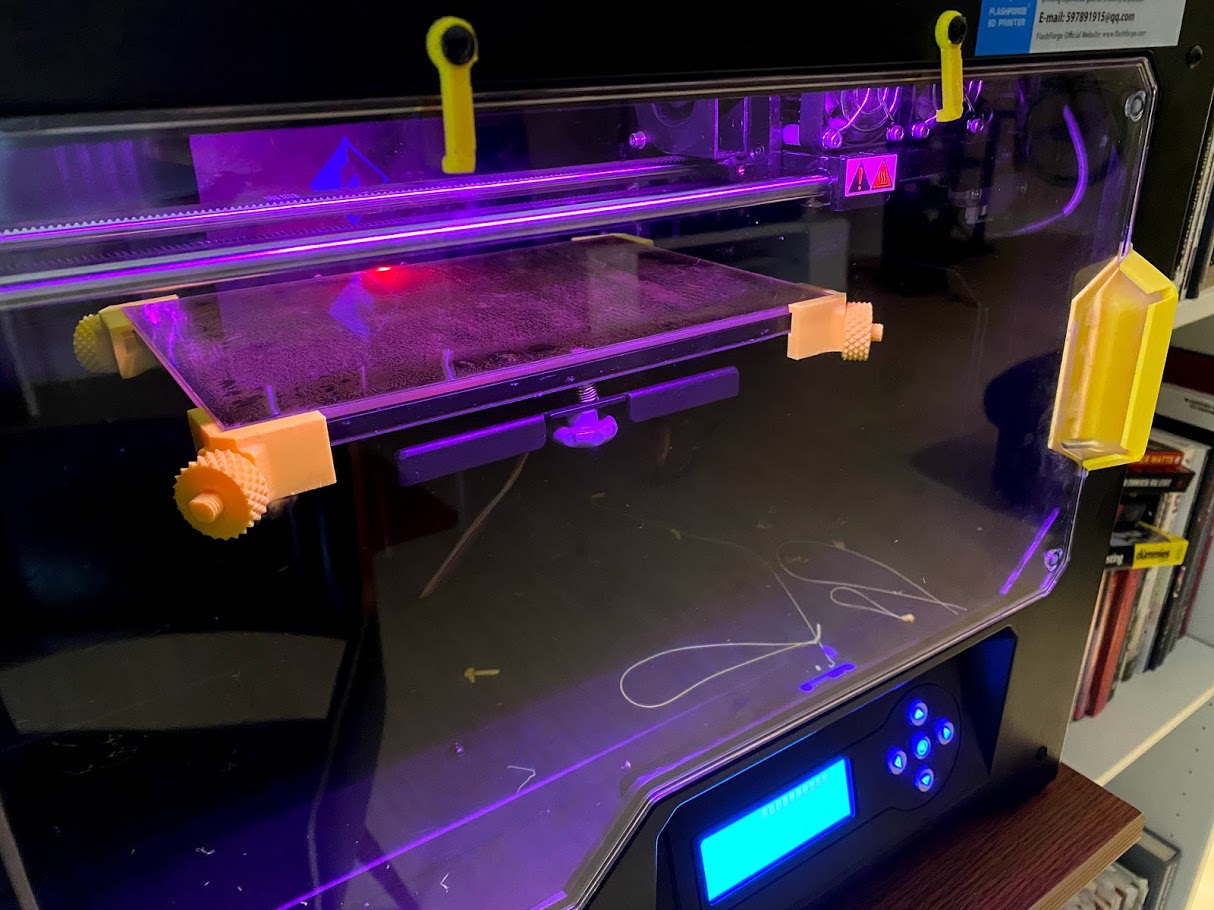 I’ve decided to work on my own hobby electronics cases for the Jetson Nano and nRF52840 dongle.

It’s time to learn how to do 3D printing and CAD modeling!

I found an excellent summary of FDM filament properties on the Simplify3D website. I was looking for something that would work well outdoors and survive drops from 6 feet. It looks like ASA is the only option. To print with ASA (and ABS) it’s essential to have an all-metal hotend so the extruders can run hotter more safely, and to have a PEI bed, and to have an enclosure to maintain temperature stability and contain toxic fumes.

ASA is a newer filament than ABS and it is very limited in color selection. I can only find white, black, and blue colors from a few reputable vendors. ABS has many more colors available. It is safe to pour coffee into an ABS mug, but not an ASA mug.

The printer I chose was the FlashForge Creator Pro (2016). This is a bit older, but it has plenty of modern features like an enclosure for keeping a high ambient temperature while printing, clearly designed for printing ABS so it works with ASA filament also. The printer supports 0.1 mm layer height with a 0.4 mm nozzle, yielding high quality prints. Since it’s older, the price was really nice at under $700 pre-assembled and ready to go. Instant shipping from Amazon was a huge plus too.

All that said, the Prusa i3 MK3S+ is the correct choice for 3D printer right now and I’ve ordered one of those also to improve my print speed. The Creator Pro is also still a very good machine with lots of community support and upgrades available as I found out.

The Creator Pro can print in two colors:

I upgraded both of my hotends using Micro Swiss MK10 All Metal Hotend Kit .4mm Nozzle for WANHAO, FlashForge. This was a process. I had to pull the whole extruder assembly apart and put it all back together:

And then making sure both extruders were exactly level within 0.1 mm was a huge pain with lots of false attempts:

The bed is upgraded with a borosilicate glass sheet with a PEI sheet on top. The bed attaches to the printer using some (really cool) printed clips, allowing it to be removed from the printer and replaced easily. In theory I can have a second glass bed that can be swapped in while I wait for the previous print to cool.

For cleaning I have only needed shop cloth and 99.9% IPA.

ABS prints stick really well to the bed and don’t curl while printing and can be removed easily with appropriate tools.

Simplify3D turns out to be an expensive but worthwhile upgrade over open-source software, yielding significantly better and faster prints. In one case I saved over 2 hours in a print just by switching from Cura to Simplify3D on the same model, with much better results.

I’ve been able to tune the Simplify3D settings for the Creator Pro to produce a lot of electronics enclosures with IC3D ABS filament at high quality.

I had a bunch of Raspberry Pis around the house from working on my Pi KVM project and Pi LoRa FTP project. Turns out with the GPX plugin for OctoPrint you can print efficiently over the network on the Creator Pro.

None! These are a pain to peel off with ABS/ASA so I got my prints working well and disabled them.

These turned out to be better than other options.

This is needed on a lot of cases because of vertical windows in the sides for ports.

Before installing the all-metal hotends the ideal temperature was around 238C, but it’s a bit higher with the additional metal.

This shortens the nozzle purge to avoid backing up the nozzle causing some early blockage while printing.

I can probably print faster, but this is honestly good enough and the quality will only get worse.

I tried maxing out the movement speed but it causes a bunch of ringing artifacts in the print, so keeping it at a reasonable speed.

This was important for a printing cases where there are screw holes that extend up. Often times they’re fairly thin, so the default thin wall type is squiggly and causes a lot of agitation that makes for messy prints.

I settled on these by printing this stringing test https://www.thingiverse.com/thing:2219103 in a grid search for the right settings.

Starting from ABS settings above:

Fighting stringing with this filament. Cutting the extrusion a bit early and retracting harder seems to minimize it.

I increased movement speed to give it less time to string, which will make prints go faster but will probably introduce some vibration ringing into the outer perimeter of the prints.

I’ve had a few failed prints at 9000 mm/min where the belts skipped, so backed off from those faster speeds.

ASA sticks pretty well to PEI and removes about as easily as ABS, at a lower temperature. At 93C I was getting some elephant’s foot so dropped it a bit.

The manufacturer recommended somewhere between 240C and 260C. I wanted a lower temperature to reduce stringing, so err’d on the side of print quality over strength.

The 3D Printer community provides a lot of worthwhile upgrades to the printer that I installed:

Tour of the printer with upgrades: https://www.youtube.com/watch?v=dGrqcq0XWZw